Engineering Outside The Box

From January 2013 to Present 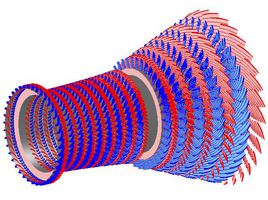 Experimental work done by Clement Joly at the University of Florida (Gainesville, FL, USA) at the Combustion and Propulsion Lab supervised by Dr. Corin Segal.

This 6-month internship was made possible thanks to a partnership with the CNRS ICARE (National Center on Scientific Research – Institute of Combustion, Aerothermal, Reactivity and Environment) situated in Orléans (France). Praise to Dr. Ivan Fedioun for his implication and interest in my work.

Aim: Improve the mixing between the oxydant and the oxydizer to increase, in the end, the combustion efficiency for a supercritical jet. 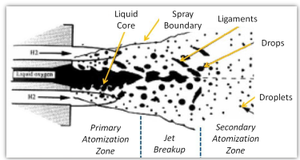 Schematic of the Disintegration of a Jet

Summary: Experiments were done in order to study the disintegration of an injectant jet to simulate the breakup of hydrogen in aerospace applications under subcritical, transcritical and supercritical conditions in an inert surrounding where the pressure and temperature are controlled. The distinction between subcritical and supercritical fluid was performed through the visual study of experiments results as well as through the analysis of the potential core length and the jet spreading angle.

The jet appeared smoother and less wavy under supercritical conditions than under subcritical ones due to the reduction of the surface tension when approaching the critical point of the injectant.

The core length was found to evolve differently according to the critical state of the chamber and the injectant while the spreading angle showed a strong dependence with the square root of the injectant-to-chamber density ratio.

Moreover a droplet analysis was performed for supercritical injection into a subcritical surrounding to investigate the conditions of formation of these droplets in spite of the supercritical state of the injectant. It was found that the jet can transition locally to subcritical when entering a much cooler environment due to heat transfer according to 2 found parameters. Additionally, the size of the resulting droplets was discovered to evolve as a second order power law with the distance from the injection.

To learn more about this internship go to: https://clementjoly.wordpress.com/uf/ 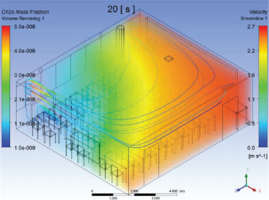 Title of the internship: “Numerical simulation of tests in a hypersonic hyperenthalpic blowdown wind tunnel”

Aim: Understand the supersonic combustion of air and hydrogen over a flate plate for different experimental conditions to study its aerothermochemical phenomena for a non-vitiated and a vitiated heater. 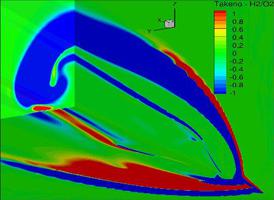 Summary: This internship was about the numerical study of the H2/Air supersonic combustion process, reproducing the F4 wind tunnel conditions (viciated air due to the arc-heating process) in order to determine if whether or not F4 was able to study such a phenomenon.

Completed calculations allowed concluding that the wind tunnel is indeed able to study supersonic combustion. This will help us understand better this process still not masterized at the present time, while using a clean fuel.

What I'm Talking About...

Version imprimable | Plan du site
"Life is the mere interview of your admission into heaven but what if, without your knowing, you had been given a second chance?" -- Life v2.0, Clement Joly
Connexion